i’m out of checks 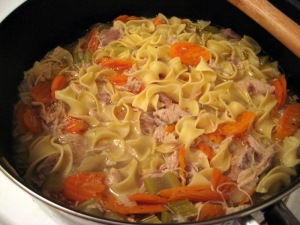 I think it’s time to get rid of the chicken in canned chicken soup. It’s not nice chicken. And it’s only white meat because that’s the color they bleached it. Even if you’re buying expensive chicken noodle soup, it’s still, basically, canned chicken. Gross. We know it’s a chicken-based broth with over-cooked vegetables, Mr. Cambell’s. You don’t have to float chicken-esq, pseudo parts throughout to cement that fact in our hungry little minds. When I’m sick, I buy your stupid soup and pick out the meaty parts. I pick them out and put them back into the can and throw it away. I’d give them to the dog, but he doesn’t like having the runs, either.

2 responses to “i’m out of checks”